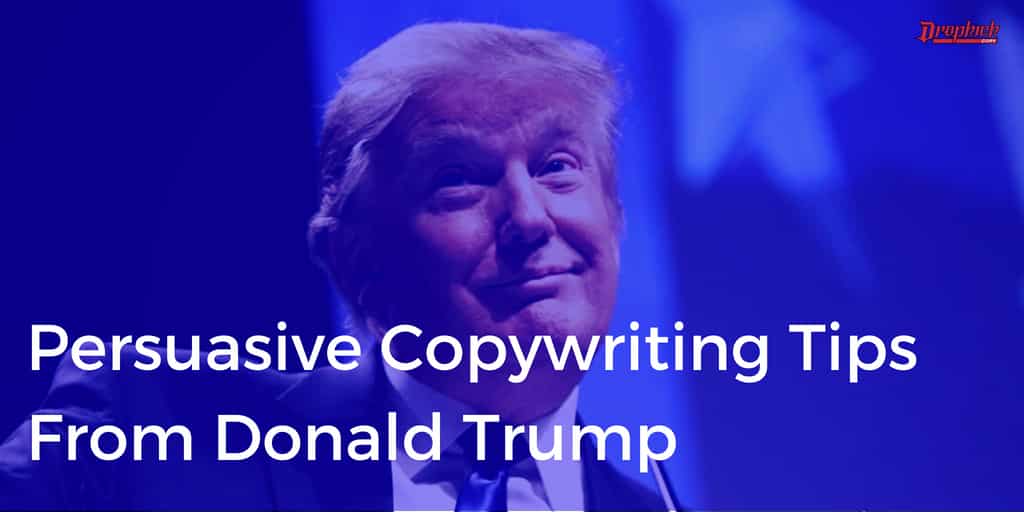 As a copywriter, I’m in the persuasion business. It doesn’t matter what I’m writing, my job is to convince you to take action.

It makes sense for me to to learn about persuasion from others who are great at it.

Love him or hate him, you can’t deny the phenomenal success of his presidential campaign. Every passing day, it is more and more likely that Trump will secure the Republican nomination.

Media pundits, heralding his doom ever since he announced his candidacy, were all wrong.

Except for a tiny group of social commentators and media personalities.

In the news, “has Donald Trump finally gone too far?” has been replaced by “Donald Trump is the inevitable Republican nominee.”

Scott Adams, creator of the ‘Dilbert’ comic, has been writing about Trump’s mastery as a salesman since last July.

Using his understanding of the current socio-cultural climate in America:

And his understanding of marketing:

People who haven't studied persuasion say Trump is feeding into anger, but his message is optimistic. MAGA = aspirational.

A year on and after the fact, political pundits are re-packaging (plagiarising) Cernovich’s and Adams’s commentary and insights.

Trump openly acknowledges this mastery over his voter base. Look at how he describes his supporters.

I mean, here’s a guy who can refuse to denounce the Ku Klux Klan and still come out unscathed.

Instead of being dismissive, I got curious.

I’ve been studying his antics for the better part of 6 months.

Feels over facts: how we make decisions

Trump’s secret to success can be found in our brains.

We are cognitive misers.

Our brains avoid the energy-draining process of using logic and reason, in favor of faster, more efficient decisions using emotion.

Humans behave irrationally, even though we’d like to believe otherwise.

Don’t turn your nose up at it; you do it too.

Why do people support him?

Take a look at why people support Trump.

I don’t care what his actual positions are. I don’t care if he says the wrong thing. He says what’s on his mind. He gives honest answers rather than prepared answers. This is more important than anything any candidate has done in years.

“Guys, seriously. Wake up, open your eyes. Trump is the man.”

Let’s try something new. Let’s run America like a business, where no colors matter. Whoever can do the job, gets the job.

I don’t want to be in the ring with any candidates. I want to be Trump’s running mate.

Well, he fired me twice…But I think he’s fantastic…That’s why he’s surging in the polls. He’s saying what he thinks.

@realDonaldTrump has been a great friend for many years. We don't need another politician, we need a businessman like Mr. Trump! Trump 2016

dear
O. Wilson
they took ur comment
out of context!
I'm honored!
thank u!
If Trump will hv me
I'd be his VP
in a heartbeat!
©#TrumpSheen16

All of them justified their support with emotional reasons.

If you ask Trump supporters why they support him, this is the most likely response:

How the hell does he do it?

Here are 11 persuasion tips you can learn from Donald Trump and apply to your copywriting.

According to the Flesch-Kincaid readability score, Trump speaks at a 4th grade level. 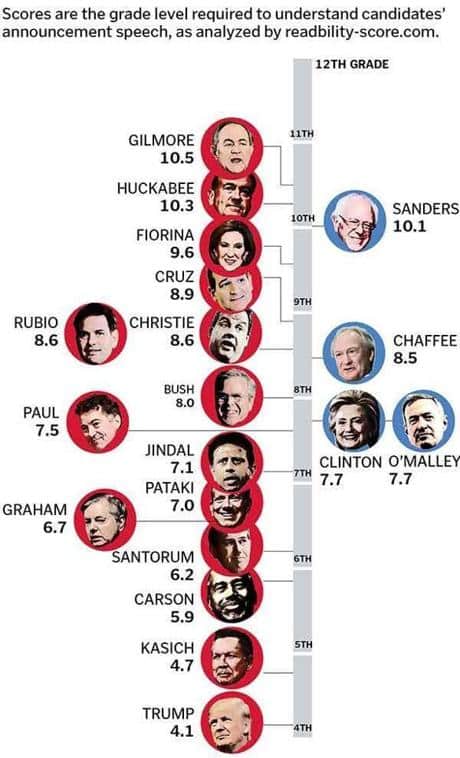 Don’t mistake this simplicity with a lack of effectiveness. According to several experts, inspiring, persuasive speech is often very simple.

Watch this in action:

Trump constantly reframes events to fit his narrative and shift public perception in his favor.

Last July for example, Reince Priebus, chairman of the Republican National Committee, called Trump and asked him to tone down his rhetoric.

The next day, however, Trump reframed the call as congratulatory.

Totally false reporting on my call with @Reince Priebus. He called me, ten minutes, said I hit a “nerve", doing well, end!

Trump gains acceptance for his ideas through simple repetition.

This is a classic, scientifically proven sales technique.

Trump takes this to the next level:

Have you wondered why Trump has so much support among the masses of middle America?

Here’s a privileged white guy who grew up rich, went to school at Wharton, and is wealthier than 99.9% of his supporters. He talks like them. On purpose.

Democrat or Republican, in an age where trust in politicians is at a minimum, it is not hard to see the attraction of that blunt aspect of the New York image…It’s a quality that can be profoundly appealing. – Michael Newman, linguist at Queens College

Can you imagine how much support he’d have if he spoke like this?

Trump regularly uses humour to deflect criticism and win over an audience. It’s extremely hard to dislike or even disagree with someone who makes you laugh.

Here are two situations when he uses humour brilliantly. The first is World-famous.

Notice how Megyn Kelly is right (he even acknowledges it) but by the time she corrects him, it doesn’t matter.

Her point was drowned out and the audience was ready to accept his justification (it was only a joke) because he made them laugh like that.

Next, watch him flip a boo-ing audience into a cheering one.

When selling, it’s not enough to push customers towards your product.

You also have to have to pull them away from your competitors product.

What’s a good way to differentiate yourself in a market of same-y products?

Joanna Wiebe, copywriting maestro and IRL Peggy Olson, says that you should start a fight.

Since he announced his presidential run, conflict has been a part of Trump’s identity as a candidate.

We are rebuilding other countries while our own country is going to HELL. Time to rebuild the U.S.A.! Tell our stupid politicians, ENOUGH

I am the only candidate (in many years) who is self-funding his campaign. Lobbyists and $ interests totally control all other candidates!

"@becker_berta: @longtalltexan20 Trump single handedly did what no other politician ever dared to do, attacked the media for all their lies"

Trump is ‘not a politician.’

Trump is ‘calling out the biased media.’

Trump is a ‘winner and America will start winning again if they elect him.’

America doesn’t just have problems, it’s “going down the drain.”

China doesn’t beat America in trade, “they kill us.”

The Iran sanctions deal wasn’t just bad, it was “the most incompetent deal I’ve ever seen negotiated.”

Trump routinely relies on our cognitive biases to generate support for himself and his ideas. Here are three examples.

The Halo Effect – Trump supporters believe that because he is a wealthy and successful businessman that he will be just as successful in the Whitehouse.

Suvivorship bias – It doesn’t really matter that Trump isn’t as successful or as wealthy as he claims, all you see are the towers, hotels and resorts that are still standing.

The Availability Heuristic – It also doesn’t matter than an American is more likely to die being struck by lightning than dying in a terrorist attack. San Bernardino happened and that’s why Trump is right about his proposal to temporarily ban all Muslim immigration.

Trump is always talking about his poll numbers and the huge crowds he pulls.

He also name-drops. This doubles as an appeal to authority.

Our brains like stories a lot more than cold, hard facts.

Have you noticed how Trump loves to tell stories?

He uses anecdote to argue his case, not reason.

Do you want to deep dive into Trump’s persuasion?

Read The Art of the Deal and Think Big and Kick Ass by Donald Trump.

You can be a Master Persuader too

Seeing Trump use these persuasion hacks in his speeches, debates and interviews is, in my opinion, better than any textbook you can read on the subject.

You can use these persuasion hacks to see significant improvement in your personal and professional relationships.

Your speech will work magic on your family, friends and coworkers.

Caveat: these techniques are extremely powerful, so only use them ethically.

Don’t use them for evil.

One final disclaimer. I don’t support Trump or any other U.S. presidential candidate.

I don’t even care about the outcome of the election.

My interest in Trump is purely academic.

How many of the above persuasion techniques did you see me use in this article? Let me know in the comments.